In UK politics you could be forgiven for thinking the House of Lords was a sort of doddering, elderly relative no one wants to sit next to at Christmas dinner. You barely see them for most of the year and you can’t shake the suspicion that they think it is still 1929.

But, never one to disrespect our elders, we sent the Bureau’s Maeve McClenaghan on a trip to the house. There she found that beyond the archaic rituals and old-fashioned clutter, the House of Lords is full of some rather intriguing tales.

It is early Saturday morning when I attach myself to a string of eager tourists and make my way into the House of Lords for the first time.

There is something of an enigma about the place. While its sister body the House of Commons is regularly splashed across the news, the House of Lords’ interior only occasionally makes it onto our TV screens.

Just as well really, as this kind of lavish decor would make even Laurence Llewelyn-Bowen’s hair stand on end.

The gilt and gold of the chamber stand in stark contrast to its Commons neighbour. Deep blue carpet lines the floors, set off by the dark red leather of the peers’ benches.

Tradition is at every corner. The Lord Speaker presides over the house and is quartered appropriately – he or she (currently Baroness D’Souza), sits at the front of the chamber on a special bench called ‘the woolsack’. This is a large red cushion stuffed with wool from the various nations of the Commonwealth.

We are told in no uncertain terms that we are expressly forbidden from sitting down anywhere in the chamber. No common imprints in the cushion, then. 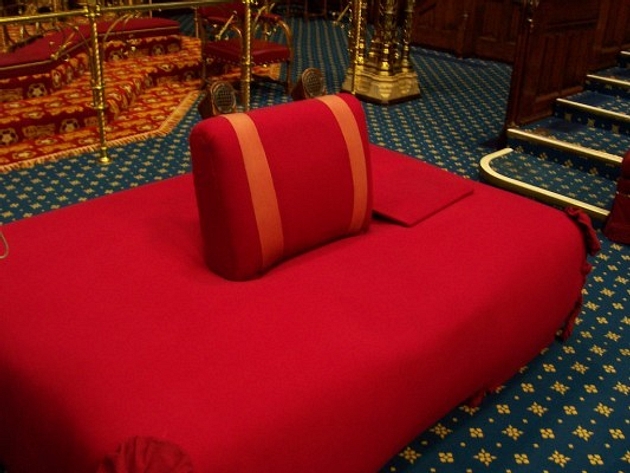 The Woolsack, unbismirched by common imprints.

The Lords go big on art. The parliamentary collection has over 8,000 works, over 80% of which are on display throughout the buildings of the parliamentary estate. These works include 139 murals and mosaics, 219 busts and statues and 10 tapestries.

Similarly, the Lords is replete with enough chairs and tables to make Antique Roadshow followers go weak at the knees – though they would still not be allowed to sit down on them. Auction house Bonhams has valued the House of Lords’ furniture collection at over £13.5m.

Style extends to the Lords themselves. Although there are no peers around during my visit, I hear there is a hairdresser based in the House of Commons which is open full-time during sitting periods, to make sure both peers and MPs look their best.

The scarlet and ermine robes worn by peers on ceremonial occasions are loaned to them by the house. According to the House of Lords’ accounts, the robes were donated or bequeathed to it by former Lords. The value of these donated robes has been estimated at £217,453.

The only break in the opulence of the house, almost anachronistic in their presence, are two digital clocks and a handful of TV screens lining the walls of the chamber. And time is of the essence since the house only sits for a third of the year – 130 days.

Women have only been permitted to sit in the house since 1958, and even now fewer than a quarter of peers are women.

Admittedly, the Lords can work hard when they have to. Working hours range from 10am to 11pm, but sometimes the Lords sit all night. In January last year, for example, the Lords sat for 11 hours, debating the Parliamentary Voting System and Constituencies Bill until 1am.

In some cases the Lords resort to getting some shut-eye on camp beds, hastily erected around the chamber’s side-rooms. However, an email to the Chief Whips, published on PoliticsHome, suggests that fire safety regulations may mean the days of Lords’ sleepovers are numbered.

No wonder they get tired: according to the house, last year they spent 400 hours examining bills and made 610 changes.

One possible reason for these lengthy sessions is that speeches are not subject to any time limits. But even the more verbose Lords are not above being silenced. The house can put an end to a speech by approving a motion ‘that the noble Lord be no longer heard’ – a terribly polite way to shut someone up.

Who’s in the club?

Walking around the House of Lords, the weight of history emanates from every surface. Despite their enigmatic and rather old-fashioned image, the Lords provide a crucial counterpoint in UK politics, querying potential legislation and holding the House of Commons to account.

There are currently 816 Lords from all kinds of backgrounds, to bring a variety of life experience and expertise. Lord Wei – the youngest peer in the house

But the club is not open to everyone. Nobody younger than 21 can sit in the House of Lords, and it is rare for anyone under 35 years to be ennobled. The average age of a Lord is 69.

The oldest sitting peer is Lord Campbell of Alloway ERD QC, who recently celebrated his 95th birthday. The youngest Lord is Lord Wei, who is currently 35, while Baroness Berridge, the youngest female peer, is 40.

There is also something of an imbalance when it comes to gender. Women have only been permitted to sit in the house at all since 1958, and even now fewer than a quarter of current peers are women.

Members convicted of a crime and sent to jail do not lose their peerage or membership – sitting and voting rights resume when the custodial sentence finishes.

But despite the restrictions on getting in, not everyone takes part once through the door. A large number of Lords do not turn up for every session. On average attendance between 2009-2010 was 388 lords or 47%. Only 21 lords have currently been granted a formal leave of absence.

In one sense this is fortunate, as the chamber certainly does not have space for all 825 Lords. This means peers must enter a ballot to attend grand events such as the Queen’s opening of parliament.

Members convicted of a crime and sent to jail do not lose their peerage or membership: although for obvious reasons they can’t attend sittings in parliament while they are in jail, their sitting and voting rights resume when the custodial sentence finishes.

The only crime that will earn you a complete ban from the House of Lords is high treason: only a full pardon can restore the right to vote or sit in the house if you’re found guilty of such a crime.

Being a Lord is something of a labour of love: there is no salary. But there are perks: peers can claim a tax-free daily allowance of £300 when they show up for sessions, so if a Lord turned up each day the House was in session, he would be able to claim £39,000 a year. Taking into account the higher tax bracket, this is the equivalent of a job paying a pro rata rate of over £150,000 a year. Lords can also claim for other expenses including travel costs. In the last six months of 2011, peers claimed £723,071 in attendance travel costs. Of that amount, £22,607 was for taxis, parking and tolls.

As well as claiming expenses, membership of the House of Lords makes you eligible for a loan of two computers and a palm-held computer for parliamentary work. Some Lords have embraced the electronic age – with several, such as Lord Rennard and Lord Drayson, active on Twitter. For others, it seems old-fashioned snail mail is still the communication mode of choice. Around £9,400 was claimed in postage costs between July and December 2011.

Accounts show that the overall cost of running the House of Lords was £77.4m – significantly under the total budget of £102m. This underspend is partly explained by the recess triggered by the 2010 general election.

A quarter of all Lords list property on the Register of Lords’ Interests.

The register requires that peers register ‘Any land or property a) which has a capital value of more than £250,000 (but excluding any personal residences of Members and their spouses), or b) from which an income of more than £5,000 a year is derived.’

These include Lord Ahmed who registers a guesthouse in Doncaster, Lord Alli who has a property in Guyana and Lord Chorley who owns a cottage in Cumbria from which rental income is received.

And if being a Peer of the Realm makes you think you’d want to live in the UK, think again. On the last allowances register four Lords listed their primary addresses as overseas, with three of those having settled down in La France.

Main image of Baroness D’Souza, speaker of the House of Lords via Flickr/UK Parliament