Trading as Pounds to Pocket and QuickQuid, the US-based firm is one of the biggest players in the UK payday loans market. It began trading in 2007.

It is registered in Delaware, the tiny state known as the ‘brass plate capital’, where US firms can take advantage of low taxes and laws protecting shareholders.

In the UK its only presence are two addresses registered with the Office of Fair Trading (OFT) belonging to a City of London lawyer and secretarial service firm in Green Lanes, north London.

The firm has announced it is closing its UK branch and instead will trade from the US. It is owned by Cash America Net Holdings, based in Chicago.

Founded in Irving, Texas in 1983, starting with a single pawnshop, the chain grew through rapid acquisitions and was listed on the New York Stock Exchange in 1990.

The company’s annual report for 2012 show its UK operations now generate turnover of £198m of its £1.2bn annual revenue.

The report describes the firm’s ‘core purpose’ as providing ‘financial solutions that help ordinary people meet their needs and pursue their dreams’.

It says it offers ‘reliable assistance when, often, our customers have nowhere else to turn.’

In his report to shareholders in April the firm’s president wrote: ‘The recent review of the payday lending industry in the UK by Britain’s Office of Fair Trading have captured most of the headlines and analysts’ attention in 2012. The most frustrating part of the process is the uncertainties it creates…

‘I wish I could provide you with granular clarity on how these federal agencies might impact our business, but to do so would only be speculation at this point…

‘Fortunately, many legislators today take heed of the growing library of independent research documenting the lack of credit in the underbanked community and the dangers associated with restricting product design via legislation.’

Hurwitz is an expert in ‘control theory’ and helped design a mathematical model to allow the firm to issue the maximum number of loans in the shortest time possible at the minimum risk.

Wonga sees itself as a technology company rather than a finance firm, with Damelin’s ambition for it to be ‘world class…like Facebook, Amazon and Apple’.

Nottingham jeweller Henry Hallam set up Instant Cash Loans, which trades as the Money Shop, with one shop in the city centre in 1992.

By the time he sold up to US loans giant Dollar Finance in 1999 he had opened branches in Bristol, Newcastle, Sheffield, Coventry, Cardiff, Birmingham, Sunderland, Hull, Southampton and Bolton.

At the time Hallam said: ‘By buying us they have established a bridgehead in the UK.’

That ‘bridgehead’ has seen the firm expand rapidly, going from 34 employees in 1998 to 2,339 in 2012.The company is now generating revenue of £172.3m a year and profits of £34.4m. It offers cheque cashing, pawnbroking and foreign currency as well as loans.

Backed by loans from the Bank of Scotland and Barclays to cover further lending, the firm rapidly expanded. By 2010, in the run-up the sale to Dollar Finance, turnover was up to £60m, and it employed 232 staff.

Dollar Finance has continued to expand the company’s operations and it now employs 285 staff and had a turnover of more than £123m last year.

Express Finance Bromley was set up in 2000 by Michael Thorpe, aged 65, from Bromley, with a loan from Barclays Bank. Thorpe sold his his stake in the firm to Dollar in 2009 and the US firm began a rapid expansion.

Daryl Thorpe remained a director of the firm until last year. He is now running a new payday firm, Money in Advance, which has South African mining company president Greg Kinross as a director.

Owned by entrepreneur James Benamor, who started his loan brokerage company, the Richmond Group, in 1999 at the age of 21.

Unable to afford advertising at the time, he says he printed leaflets and hand-delivered 30,000 in the first month.

His firm says it has abandoned ‘payday loans’, which it previously issued at 199% APR charging £400 interest on a month long loan of £400.

At the end of last year it replaced these with new longer-term ‘guarantor loans’. These are ‘based on how much your friends trust you, NOT your credit score’, it said.

Last year the firm had a £50m turnover.

After leaving school in 1989, Dale Chapman started as an apprentice fitter at a local bus company, but quickly realised working for someone else was not for him.

He opened a shop selling secondhand furniture and progressed to becoming one of the UK’s youngest pawnbrokers before starting his loans firm in 2001.

Now 32, he sold the firm to US loan company Speedy Cash Holdings in February.

Claiming to be one of the UK’s fastest growing payday lenders, its website says: ‘Make any day your Payday’ and reveals that borrowing £225 for 28 days would cost £66.38 in interest, the equivalent of 2,814.2% APR.

It claims it is now processing over 800,000 loan applications a month.

Although the purchase price has not been revealed, company disclosures in New York showed the American buyers raised $100m (£64m) to fund the acquisition and future loans to customers.

In the run up to the sale, Chapman and his wife Kim bought a property in Harrogate, paying £1.75m in cash according to planning records.

They appear to have immediately upset their new neighbours with plans for a car port and garage which were said to be a ‘over development’ of ‘listed’ buildings. A second application to convert a barn and connect it to the house was rejected and plans to extend the access road to the house drew concern from the local Ramblers and Bridleways Associations.

At the same time, Chapman’s father Paul, 63, another shareholder, bought a farm in Harrogate for £2.15 million, according to Land Registry documents. He moved in after selling the family home in Keithley, West Yorkshire, which had been run as guesthouse. 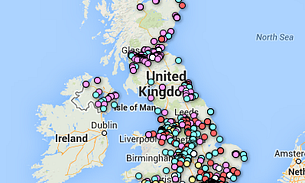