Controversial payday loans companies, some charging interest rates as high as 7,000%, have experienced phenomenal growth since the start of the recession.

New research by the Bureau, which analysed dozens of company accounts and websites, found a rush of companies into the industry. At least 24 new ventures have been launched in the high cost credit sector since 2008, some operating several different trading companies and many offering short-term payday-style loans.

But far from feeling squeezed by the increased competition, all but one of the ten largest lenders specifically offering payday loans saw their turnover more than double in just three years – with one lender growing 42 times.

The second part of the Bureau’s investigation into the high cost credit sector follows Wonga’s announcement that it made more than a million pounds of profit a week last year. But Wonga is not the only company operating in the sector to turn a profit – the Bureau’s research shows five of Britain’s top ten payday lenders each recorded more than £10m in pretax profits in their last reported accounts.

The Bureau’s latest research concentrated on the top ten companies specifically offering short-term, high-cost loans, most of which are linked to a borrower’s pay day, to establish how this controversial sector has grown through the recession. 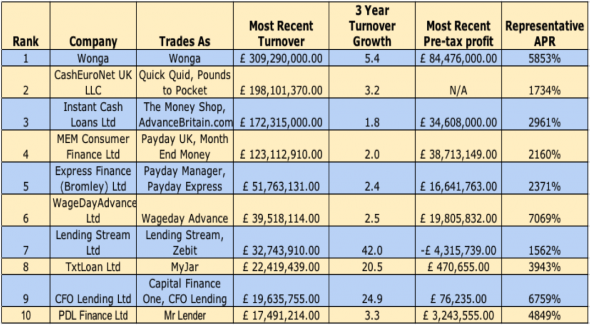 Above: The key findings of the Bureau’s investigation. Get the full dataset here.

The short-term lending products offered by these companies, usually described as payday loans, have come under heavy attack by consumer groups including the Citizens Advice Bureau. Such groups draw on research into the industry showing the difficulty many people have repaying their loans. These reports attracted the attention of the Archbishop of Canterbury, Justin Welby, earlier this year when he announced that the Church of England intends to support credit unions in an attempt to put payday loans companies ‘out of business’.

Yet despite these widely reported difficulties, consumers do not appear to be shying away from the products on offer.

Wonga, which launched in 2007, reported the biggest profits in the market. It has turned a loss four years ago into profits of £84m in 2012 despite more than doubling its number of employees in the last year. In 2011 the company had 131 members of staff. By the end of 2012 this had grown to 325.

The company reporting the second highest profits after Wonga was MEM Consumer Finance. The US-owned company made a profit of £38.7m last year on a turnover of £123m. It lends up to £1,000 at 2160% APR.

Wage Day Advance, which was bought by US-owned Speedy Cash Holdings in February, has increased its profits 32 times in five years to £20m on turnover of £39.5m. This represents a very healthy 50% profit margin. The company offers payday loans to borrowers at an APR of 7069%.

In terms of turnover, the fastest growing company was American-owned Lending Stream. Its turnover increased 42 times from £700,000 to over £32.7m in three years. It offers payday-style loans in the UK though Zebit, which lends up to £800 from one to seven months at an APR of 1561.7%. The company also offers a fixed-term six month loan through Lending Stream at an APR of 4071.5% – a rate that recently rose from 3378.1%.

Despite its growth Lending Stream is one of the few payday lending companies examined not to be making a profit. Its most recent accounts record a pretax loss of £4.3m, but this was after paying over £5.2m in royalties and general administrative expenses to a related US company. As Lending Stream has not reported a profit since its incorporation in the UK five years ago it has so far paid no corporation tax in Britain. The company declined to comment.

The second largest payday loans company, CashEuroNet, owned by US giant Cash America International, turned over £198m in the UK last year, up from £15m in 2008. It operates in the UK through QuickQuid, which offers loans of up to £1500 at an APR of 1734%. It does not publish any profit figures for its UK operation.

Since last year the industry regulator, the Office of Fair Trading, has been looking at the payday loans sector. A report published in March highlighted many concerns and the OFT has written to 50 payday loans companies asking about their methods of advertising and lending. It has referred the sector to the Competition Commission.

The Bureau’s earlier research examined the 50 largest high cost lenders to reveal that Britain’s high street banks have put millions of pounds into the industry. It also showed that US companies, some banned by law from issuing payday loans in the American states where they are based, are now investing heavily in the UK’s less regulated market.