Photo of Scales of Justice, by Michael Grimes

A man who has spent years in prison on terror-related offences was due to walk free today after he defeated a court bid by Theresa May to keep him jailed pending deportation proceedings to his country of origin.

A judge this week overruled the Home Secretary’s argument that the man known in court as N2 should be remanded in custody because he is a threat to national security.

N2 was convicted of Islamist terror related offences several years ago and his long sentence has expired.

With his potential release impending May signed a deportation order on July 15 and on Tuesday Home Office lawyers asked a judge to remand him in custody until those proceedings are over. 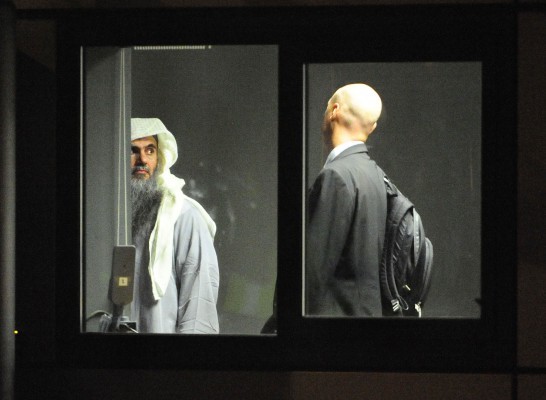 May argued he was not only a threat to the public but also a flight risk. In a case with some echoes of the infamous Abu Qatada affair two years ago (pictured left), the Home Secretary plans to deport him to his country of origin and with which Britain has a Memorandum of Understanding on deportation cases.

Granting him bail, Irwin ruled that from last night he must wear a tag and comply with other strict conditions, but he will be able to live near his family and be free to mingle in the wider community.

The bail conditions also restrict him from large transport hubs such as international railway stations and airports, and they forbid him from possessing any computer equipment or internet-connected mobile phone. He is only allowed a landline telephone.

However, the public has been barred from knowing who or where he is after the judge banned the media from identifying him, and from publishing any details about his original case that might enable people to pinpoint who he is.

Siac’s anonymity orders are often granted not only to protect the individual but also to help the police and intelligence services keep a closer watch on him.

The Bureau has been monitoring various cases in Siac for a number of years, as part of its investigations into counter-terrorism. These include citizenship stripping cases and other deportation issues.

Another protracted legal battle on deportation has the potential to infuriate the Home Secretary – particularly after David Cameron’s speech earlier this week in which he pledged a greater crackdown on extremists.

At the Siac hearing, Tim Eicke QC, for the Home Office, argued N2 would be a high flight risk as well as a risk to national security were he to be granted bail.

He argued N2 was “terrified” of being deported – and because he knew of two successful removals that survived all legal challenges, his response if given bail would be to flee Britain.

The tribunal heard that prior to his conviction several years ago N2 had previously fled to the UK from another country after fearing his home nation’s security services had intelligence he was there.

Eicke said there was a risk N2 would again cut all ties and vanish. He cited a previous psychological report which said N2 was “terrified of being deported” and another which said that the threat of deportation would mean “his mental state will be dominated by extreme anxiety”.

N2’s lawyer, Daniel Furner, of Birnberg Peirce, said his client’s fear of returning to his home country was justified because of the risk he would be ill-treated there. There was nothing in his recent history to suggest he would flee, Furner said.

Mr Justice Irwin said the risk N2 would abscond was not enough to justify his continued detention, and that his total prison sentence had expired with him having served a large proportion of it.

It was “perfectly logical” that N2 was a security risk, the judge added, but he would be aware he would be under close observation.

A hearing date for his appeal against the deportation order has not been set.

A version of this story was published in The Independent