The Ferret. Read the story.
Find out how to use the Bureau’s work

Thousands of farm animals have suffered in more than 700 serious breaches of welfare rules in Scotland in less than two years, according to official inspection reports.

Cattle, sheep, pigs and chickens have been found injured, ­emaciated, diseased or dead on arrival at abattoirs.

Numerous animals were slaughtered while heavily ­pregnant or had to be repeatedly stunned before they were killed.

There was “cannibalism” among chickens, “unnecessary pain” endured by cattle and “massive bruising” on sheep, according to inspection reports by government watchdog Food Standards Scotland (FSS) obtained by the Bureau. In other cases there were “signs of suffering”, “evident stress” and “extensive maggot infestation”.

One slaughterhouse worker was said to have been “intimidating and vicious” with a sheep. A driver was seen kicking a pig and another dragging a pig by its tail.

Politicians and animal welfare campaigners describe the revelations as “appalling”, “absolutely horrifying” and “truly shameful”. They are demanding tough new curbs by the Scottish government.

Scottish ministers stressed that mistreatment of animals was “unacceptable”, but insisted that “all required enforcement action” was taken. The meat industry said it complied with operating regulations, and farmers pledged to work hard to maintain Scotland’s “excellent track record”.

The SNP MSP Gail Ross promised to pursue ministers as a matter of urgency to find out where standards had failed – and called for more CCTV in abattoirs. “We pride ourselves on being a nation of animal lovers and to hear of these breaches makes me feel physically sick,” she said.

“I really hope that the authorities crack down on those involved and that measures are put in place to make sure this doesn’t happen again.”

The campaign group Compassion in World Farming demanded that farmers who broke animal welfare law should be made to repay public subsidies. “The data shows widespread suffering and is alarming,” said the group’s chief policy advisor, Peter Stevenson.

“This regular suffering undermines the reputation of Scotland’s livestock sector. We call on the Scottish government to urgently convene a meeting of all the relevant enforcement bodies to develop a strategy to achieve hugely improved enforcement of the legislation on welfare on-farm and during transport and slaughter.” 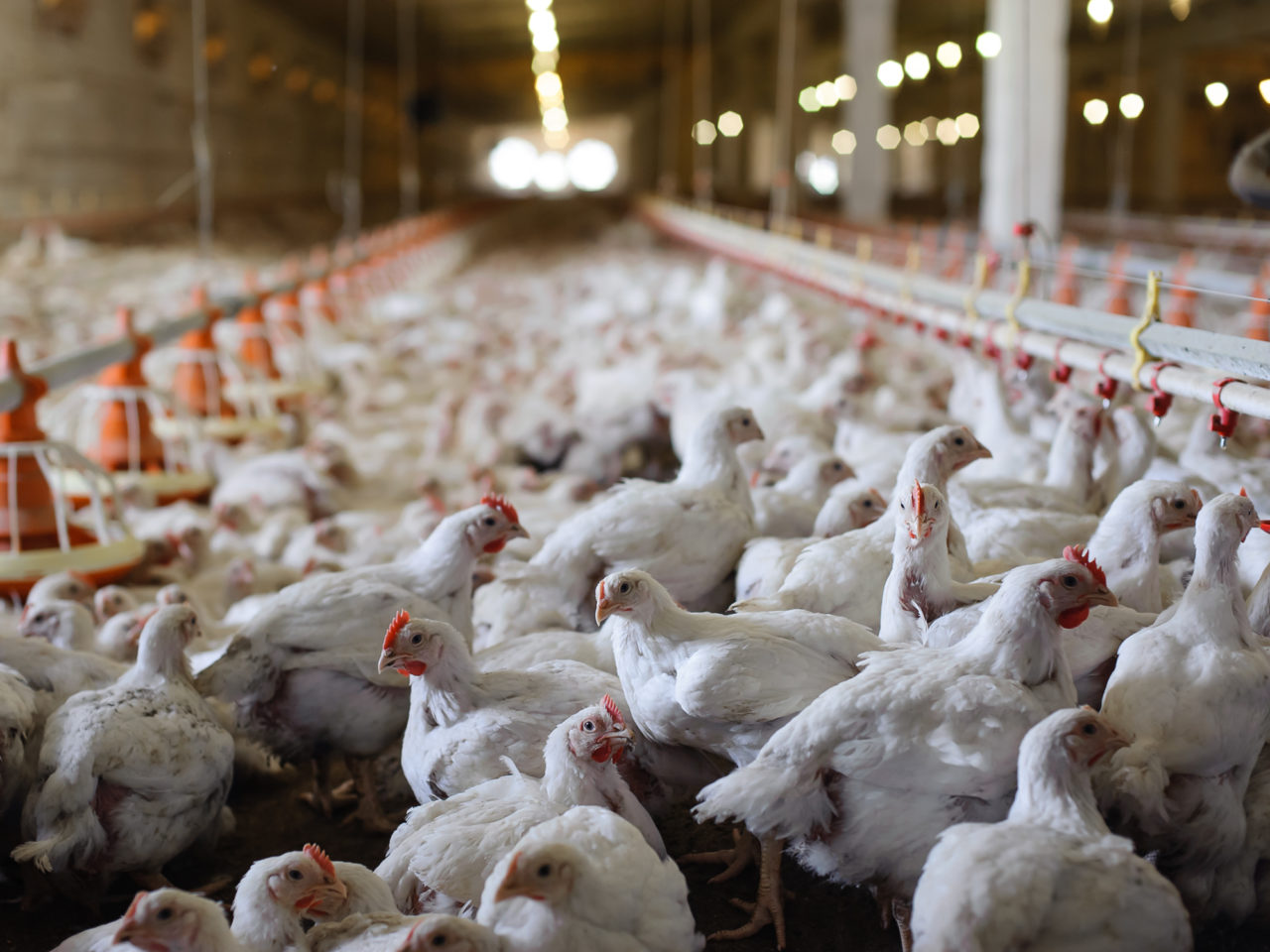 More than a third of the incidents (257) were rated as “critical non-compliances”, meaning that they posed “a serious and imminent risk to animal welfare” or had caused “avoidable pain, distress or suffering”.

The remaining two thirds (445) were categorised as “major non-compliances” because they were “likely to compromise animal welfare”. Details of four incidents have been kept secret because they are under investigation and could end up in court.

A large majority of the breaches (476) were listed as involving cattle. There were 86 breaches recorded with sheep, 77 with poultry and 63 with pigs.

A third of the incidents (242) were blamed on poor conditions during transport. A further 237 were attributed to inadequate welfare on farms, including 26 cases of poultry with footpad dermatitis.

According to the FSS inspection log, there were 130 incidents in which animals were killed when they were in the late stages of pregnancy. In 100 instances animals were found with bruising, broken legs or other injuries, and in 92 cases they were in poor health, weak or thin.

There were 45 incidents in which stunning of the animals before killing them was deemed inadequate or ineffective, or where procedures were found to be deficient. Cattle were stunned up to seven times, after showing repeated signs of recovery.

In one instance on September 27, 2016, a cow needed to be stunned six times before it lost consciousness. “The animal was first stunned in stun box, five subsequent stuns were applied while the animal was hanging over blood bath,” said an inspector’s report.

Most of the incidents (495) resulted in information being passed to local authority trading standards departments or Scottish government animal health offices. As well as four legal investigations, the FSS issued 14 enforcement notices and gave verbal or written advice in 146 cases.

The names and details of the abattoirs and farms where the breaches were found have all been redacted. But in a joint investigation with Scottish outlet The Ferret, the Bureau identified seven slaughterhouses where problems have been highlighted in separate audits carried out by FSS inspectors in 2016.

The Green MSP Alison Johnstone, who is vice convenor of the Scottish parliament’s cross-party group on animal welfare, urged the Scottish government to take action. “These figures are absolutely horrifying,” she said.

“That such unnecessary cruelty and suffering is being inflicted on defenceless animals is truly shameful, and it is essential that those responsible receive appropriate penalties and sentences.”

Johnstone argued that CCTV coverage should be increased in slaughterhouses as a matter of urgency. In September 2016 the SNP conference agreed a motion backing legislation to make CCTV compulsory and to impose requirements on siting and use.

“The thought of cattle requiring multiple attempts at stunning, animals being killed in late pregnancy or animals arriving for slaughter bruised and with broken legs is simply unacceptable.” 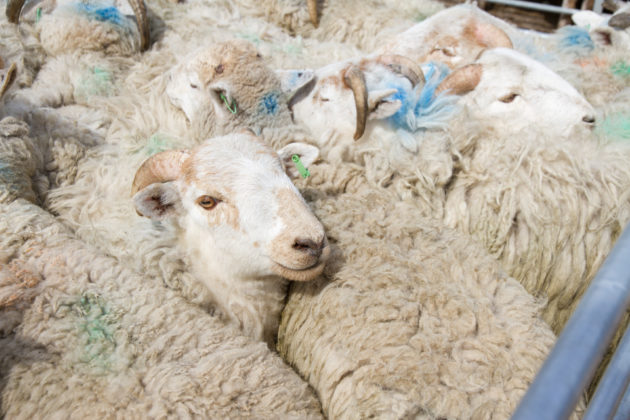 The FSS inspectors logged animals arriving for slaughter emaciated, bruised or in the later stages of pregnancy. Image of sheep via Shutterstock

Every abattoir has a permanent FSS vet and meat hygiene inspectors onsite to monitor day-to-day processing. They reported the 706 breaches listed in the FSS log.

There is also a team of specialist auditors who carry out more detailed inspections throughout the year to determine overall compliance with food law, animal welfare and hygiene standards.

These inspections take place on a rolling basis, with audit frequency dependent on previous performance. Auditors record any non-compliances found, rating them as minor, major or critical depending on their severity.

FSS’s most recently released audit reports – summarising findings from inspections carried out between January and October 2016 – show that major and critical non-compliances were found in seven Scottish abattoirs, including red meat and poultry plants.

Three abattoirs – 2 Sisters Poultry, Scotbeef and a further red meat plant – failed to meet an FSS requirement that animals are “spared any avoidable pain, distress or suffering during their killing and related operations.” Two establishments, including Shotts Abattoir, failed to ensure that “stunning methods ensure quick and effective loss of consciousness and sensibility followed by death.”

Unison, the trade union that represents meat inspectors, was “disgusted, appalled and saddened” by the extent of animal welfare breaches. “The level of inhumanity applied to animals before slaughter and during slaughter is a national disgrace,” said the union’s UK national officer, Paul Bell.

“It proves that industry cannot be trusted to police itself. We must have 100 percent supervision and a camera system operated and maintained by FSS, not contractors. A civilised society should do nothing less.”

In August 2016 the Bureau revealed that there had been more than 4,000 severe breaches of animal welfare regulations at abattoirs in England and Wales in two years. These included instances of chickens being boiled alive and trucks of animals suffocating or freezing to death.

The Scottish government urged anyone concerned about animal welfare abuses to report them. “Any mistreatment of animals, wherever it occurs, is completely unacceptable and given the seriousness of these figures we absolutely cannot be complacent,” a spokeswoman told The Ferret.

“We are satisfied that FSS fully investigate any welfare breaches which have taken place at Scottish slaughterhouses and take all required enforcement action. Scotland has high welfare standards at slaughter, with strict legal requirements that must be adhered to.”

There is an official veterinarian present at every approved slaughterhouse “to monitor animal welfare and to take immediate enforcement action if any breaches whatsoever are observed,” the spokeswoman added.

Response from the watchdog

FSS stressed that it took animal welfare at abattoirs extremely seriously. “All animal welfare breaches that occur within approved slaughterhouses in Scotland are investigated as a priority and action is taken by qualified official veterinary personnel,” said director of operations Ian McWatt.

“We take proportionate action in relation to animal welfare breaches, which range from verbal advice, enforcement letters, welfare enforcement notices to investigations with a view to providing reports to the Procurator Fiscal, and if required the suspension or revocation of slaughterer’s certificate of competence.”

McWatt confirmed that reports on a number of cases were being prepared for referral to the fiscal. “Animal welfare breaches that relate to transport or originating on farm are reported to the relevant enforcement authorities for further investigation,” he added.

“Food Standards Scotland delivers animal welfare controls at slaughter on behalf of Scottish Government and we provide them with regular updates.”

The Scottish Association of Meat Wholesalers maintained that it complied fully with all FSS plant operating regulations. “While only a tiny percentage of the reported welfare issues actually relate to abattoirs in Scotland, the association and its member companies give all such reports their full attention and have carried out all necessary corrective action to avoid future issues.”

The National Farmers Union in Scotland urged members to respond to any regulatory notices, and to ensure livestock care met the high standards that the rules demand and consumers expect.

“Scottish farmers and crofters have an excellent track record on animal health and welfare and that is a key element of the reputation we enjoy as producers,” said union president Andrew McCornick. “We must all work hard to preserve that.”

Responding to the Ferret and the Bureau, 2 Sisters poultry firm said the highest standards of animal welfare were always a top priority. Its facility had complied with 77 criteria, and had been graded as satisfactory overall.

A company spokesman said: “A single case of historic non-compliance on birds held before slaughter was highlighted, which was picked up on FSS review of our own welfare officer’s records. Due to machinery breakdown, birds were housed in our holding area overnight, as agreed by veterinary staff.

“They were monitored by welfare officers throughout, before proceeding to slaughter at 6am. This is technically measured as a non-compliance, but does not require any further action, and illustrates the depth and transparency of the FSS audit process.”

Other abattoirs audited by FSS did not respond to requests to comment.

Such reassurances are unlikely to satisfy animal rights campaigners. “This data is a damning insight into the brutality of farming and slaughter in Scotland,” said the director of Animal Aid, Isobel Hutchinson.

“Animals arrived at the slaughterhouse with infected open wounds, abscesses, lesions, back injuries, breast burns, and broken limbs. Some gave birth during transport or soon after. Others were found to be carrying full-term calves only when they were cut open after slaughter.”

The FSS inspection reports supported what Animal Aid had discovered from seven years of undercover investigations in England, Hutchinson argued. “It shows without a shadow of a doubt that the business of slaughtering animals is brutal and all too often is conducted without a thought for either the law or the appalling suffering of the animals involved.”

Rob Edwards is a freelance journalist specialising in environmental issues. He co-founded the Ferret, an investigative journalism co-op.