The number of US air strikes jumped in Yemen and Somalia in 2017, pointing to an escalation of the global war on terror.

President Donald Trump inherited the framework allowing US aircraft to hit suspected terrorists outside of declared battlefields from his predecessor, Barack Obama. Bar some tinkering, his administration has largely stuck within the framework set by the previous one.

However, the quantity of operations has shot up under President Trump. Strikes doubled in Somalia and tripled in Yemen.

In Afghanistan, where the Bureau has been monitoring US airstrikes since it was officially declared a noncombat mission at the end of 2014, the number of weapons dropped is now approaching levels last seen during the 2009-2012 surge.

Meanwhile, there are signs that the drone war may be returning to Pakistan, where attacks were also up, compared with 2016. 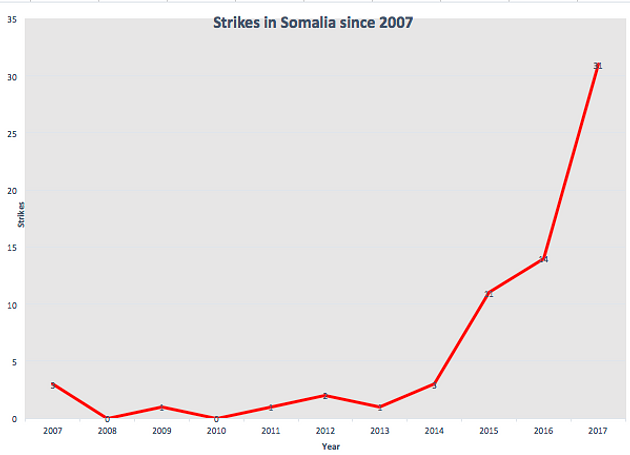 Strikes in Somalia since 2007 via the Bureau
In Yemen, 32 strikes hit within a month of the March declaration - almost as many as the whole of 2016

"We should keep a close eye on the increase in strike volume, as it does suggest a more aggressive approach, but it's not yet clear to me that it represents a truly gloves off approach," said Luke Hartig, a former counterterrorism advisor in the Obama administration and now a fellow at the New America Foundation, a US thinktank.

Hartig told the Bureau he was concerned that there had not been any significant public explanation of what the US government was now trying to achieve: "we don't have any real basis to assess, for example, why strikes have doubled in Somalia, or if any of these operations are being conducted in direct support of partner forces on the ground rather than as unilateral actions against the threats we face as a nation."

The Trump administration paved the way for the dramatic increase in the number of strikes in Yemen and Somalia when, in March this year, it was reported that parts of both countries had been exempted from targeting rules brought in by Obama to prevent civilian casualties.

In 2013, Obama introduced measures that meant that strikes in areas of countries that were not active war-zones, such as Pakistan and Yemen, had to go through an elaborate sign-off process with the White House.

General Thomas Waldhauser, the man in charge of US military operations throughout Africa, told journalists in April 2017 that though he now had leeway to order strikes without clearing them with the White House, he would be retaining the criteria introduced by Obama that a strike could only happen if there was a near-certainty that no civilians would be harmed.

In Somalia, the Obama administration had officially designating the al Shabaab group as an al Qaeda affiliate at the end of November 2016, essentially widening who could be targeted. But there was no increase in strikes until July 2017, with all but 2 of this year's 32 strikes carried out since then.

In Yemen, 30 strikes hit within a month of the declaration being reported - nearly as many as the whole of 2016.

In August, President Trump announced his South Asia strategy. The new plan deepened America’s commitment in Afghanistan, with additional troops deployed and an increase in strikes.

US strikes accounted for 177 civilian casualties in the first nine months of the year, up from 97 in the same period the previous year, the UN mission in Afghanistan found.

But as air operations in Afghanistan have intensified, and with indications civilian casualties are on the up, US transparency appears to have decreased. In September 2016, Resolute Support, the Nato mission through which the US conducts its operations in Afghanistan, started providing us with monthly data on strikes. However the flow of this crucial information has stopped as of October 2017.

Meanwhile, in Pakistan, Trump’s speech announcing the new Afghan strategy prompted further speculation that drones would return to the skies of Pakistan. “We can no longer be silent about Pakistan’s safe haven for terrorist organisations,” he said. At its height in 2010, the CIA drone programme hit 128 targets. Strikes fell with each passing year after that, falling to just three in 2016.

The Bureau counted fives strikes in Pakistan in 2017. At least four air operations were reported along the Afghan-Pakistan border in October and November, although it was unclear on what side of the border they fell.

US operations in Yemen since 2002 via the Bureau A satellite image of Barirre, Somalia Via Google Maps

In March Trump gave the US military’s Africa Command (Africom) greater freedom to carry out strikes without having to run them by the White House first. However, this did not presage an immediate surge in strikes as expected – most strikes this year came after the end of June.

While Africom will not say how many ground operations it has carried out in Somalia, details of some have emerged. One operation ended with a US fatality after American and Somali troops were ambushed on their way to their target.

Another operation left 10 civilians dead. There is substantial evidence indicating they were killed by American troops who had been told they were al Shabaab fighters, the insurgent group linked to al Qaeda.

Most US operations this year have focused on al Shabaab, which the US has been targeting since January 2007. The US also carried out five airstrikes against a band of fighters from the semi-autonomous region of Puntland who split from al Shabaab in 2015 and announced it was now loyal to the Islamic State group.

Al Shabaab marginalised the IS loyalists to a mountain range in Puntland, successfully suppressing any major schism. The IS-supporting faction has managed to flourish nonetheless. Recruiting scores of fighters, it has grown from approximately 24 fighters in 2016 to as many as 200 by the summer of 2017, according to a UN monitoring body. More US strikes hit Yemen this year than the past four years combined.

Most of the 125 strikes in 2017 hit in central Yemen, where the US military’s Central Command (Centcom) vigorously pursued fighters from al Qaeda in the Arabian Peninsula (AQAP).

In March 2017 the US designated parts of Yemen as an “area of active hostilities”, covering several unspecified Yemeni provinces in the country’s centre, essentially laying out the ground for anunprecedented aerial bombardment.

The US also started targeting fighters loyal to Islamic State - Centcom reported it carried out at least nine strikes targeting the group.

US Special Forces carried out two ground raids this year as well, the first such operations in Yemen to be publicly reported since December 2014. Both operations targeted what the US believed were AQAP positions. Both resulted in civilian casualties.

On 29 January 2017 American Navy commandos with UAE troops in support attacked a village in the central province of Bayda. The US initially claimed no civilians had been killed in the raid, but the Bureau found nine children under the age of 13 had died. NBC News later reported that the Pentagon did not dispute our numbers.

The second raid, in May, targeted an "AQAP associated compound" in Marib province. The raid was the "deepest the military has gone into Yemen to fight al-Qaida in the Arabian Peninsula", according to a Pentagon spokesperson. The operation left seven AQAP fighters dead, Centcom said, but five civilian tribesmen were also killed, according to the journalist, Iona Craig. Strikes doubled in Afghanistan in 2017 compared to the year before.

This trend looks set to continue. President Trump announced in August 2017 that the US commitment in Afghanistan would deepen. General John Nicholson, the top general in Afghanistan, confirmed that this would include a ramping up of air support.

As part of this strategy, US forces in Afghanistan were given new authority to target the Taliban’s revenue streams. These did not come to light until November 20 2017 , when General Nicholson announced a number of strikes on Taliban drugs labs in southern Helmand.

For the Bureau, Trump’s August speech confirmed what our data had already showed. For months, we had been tracking a high number of strikes. This was made possible by key data provided to us by Resolute Support, the Nato mission in Afghanistan. We began getting monthly strike totals in September 2016. In July and August, we also received a breakdown of US strikes in Afghanistan by province.

However, the provincial data has since stopped with Resolute Support citing “capacity” issues. In October and November this year Resolute Support also failed to provide the monthly strike figures to the Bureau. It is unclear whether the US will continue to withhold this information next year.

Despite the increasing strikes, the Taliban continued to put pressure on the Afghan security forces in 2017. Meanwhile, Afghanistan’s branch of Islamic State has proved difficult to dislodge from its eastern stronghold, despite a concerted air campaign against the group.

As strikes have risen, so have civilian casualties. The UN mission in Afghanistan has found a nearly 50 per cent increase in the number of civilians killed and injured by US strikes in the first nine months of 2017 compared to the year before.

This year we continued our Naming the Dead project, collecting the names of over 150 casualties in Afghanistan in 2017. Strikes resumed in Pakistan in March 2017, nearly two months after President Trump came into office, following a nine-month hiatus. Strikes since then have been sporadic, and none of them have been acknowledged officially by the US.

Tensions between Washington and Islamabad escalated this year, following reports that the US administration was exploring ways to harden its approach to Pakistan, with drone strikes one of the measures being considered. In June 2017, a rare strike hit outside Pakistan's tribal regions - only the third in 429 strikes since 2004 - angering Pakistan’s military chief. The Pakistan military has historically stayed tightlipped about such operations.

In August 2017, President Trump announced his South Asia strategy, which further angered Islamabad. In his speech, the president accused Pakistan of sheltering terrorists and threatened tougher action. This only fuelled concerns that drones would return to Pakistan’s skies.

However, only one strike has been confirmed since the President Trump’s speech. A glut of strikes were reported along the border, but it was unclear whether they hit on Pakistan or Afghan soil.

Photo of Donald Trump greeting reporters in the spin room following a debate sponsored by Fox News at the Fox Theatre on March 3, 2016 in Detroit, Michigan, by Chip Somodevilla/Getty Images

Stories from the Drones team in 2017