Growing consumer demand for chicken meat could lead to an increase in the number of industrial-scale poultry farms being built across the UK, the head of Britain’s influential poultry lobby has warned.

More intensive poultry farms of all sizes - including so-called “megafarms”, capable of housing up to a million birds - will likely be needed if the market for chicken continues to expand, according to Richard Griffiths, Chief Executive of the British Poultry Council (BPC).

In an interview with the Guardian and the Bureau, Griffiths said he believed “larger farms are probably the most efficient way to go in terms of technology, resources, impact” and that ultimately such farms are “the way that we’re going to feed the country.”

“Poultry is an attractive option for farmers. It’s a secure option, a secure income, [farmers] get a return on it. So whether that is one shed or twelve sheds... I think that the larger end will see growth.”

The predictions come amid an increasingly tense - and polarised - debate over the future of British farming and food production post-Brexit. An investigation by the Guardian and Bureau last year uncovered how the UK is already home to at least 800 US-style “megafarms”, some of them rearing more than a million chickens in vast factory style complexes.

“Larger farms...are the way that we're going to feed the country” 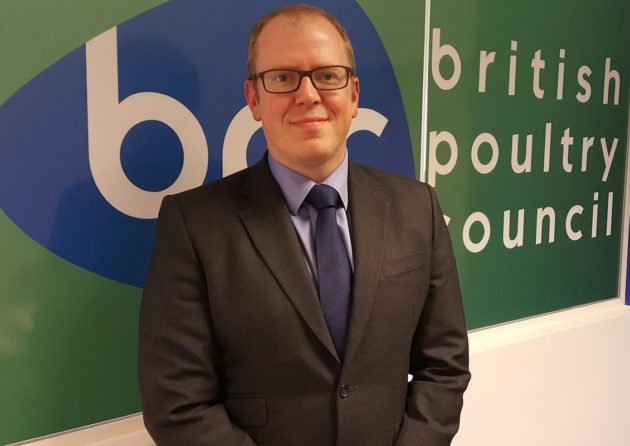 The findings alarmed critics of intensive farming and prompted Michael Gove, the environment secretary, to tell Parliament that “I do not want to see, and we will not have US-style farming in this country.”

Although Griffiths acknowledges that the availability of land across the UK is likely to be a factor in any expansion of the number of poultry farms - “it depends on a site by site basis, how much space, all that sort of thing” - he said that a wider debate was needed to ask more fundamental questions.

“We’re on a much smaller scale than the US and land use is going to be incredibly important in the future across all sectors, not just food and farming," he said. “Do we want to devote land to food production? If so how much? If so, how can we do it with the smallest possible environmental impact ? How do we do it the most efficiently?”

The sector has already seen a significant expansion in recent years: between 2011 and 2017 there was a 27% jump in the number of poultry farms holding 40,000 or more birds, and most of Britain’s intensive farms are dedicated to rearing poultry.

According to the BPC, the trend is solely driven by consumer demand: the lobby group calculates that each person in Britain consumes 13 whole poultry birds a year on average, with almost a billion birds being produced annually. The sector has been reported to contribute £3.3 billion to the economy, and is currently seeing annual growth of between 2-3%.

It’s this apparently insatiable appetite for poultry - particularly for chicken, now the UK’s favourite meat - that Griffiths believes will drive further expansion: "It’s affordable, everybody knows what to do with it, how to cook it. I think that’s the sort of combination... it’s curry or roast chicken, whatever.”

However, in areas of the country that have seen a concentrated growth - such as Powys, Wales, where recent reports suggest there have been 99 applications for new poultry sheds since 2011 - proposals for new or expanded farms have been met with significant opposition.

Griffiths said that many of the new, larger farms that are being built “are remarkably technologically advanced, low energy, biomass heating, all of the feed and drink is automated”.

“The scale of a farm is no measure of, say, welfare, or the health of birds”

He added that larger farms are not in themselves detrimental to bird welfare. “I think the skills and technology are improving over time, the scale of a farm is no measure of, say, welfare, or the health of the birds.”

“Being able to look after and care for large numbers of birds on a farm, I think that’s the efficient way to go, if, if we’re looking at growing population, feeding more people, it’s a better protein, accessible, affordable, all of those.”

Concerns around antibiotic use on poultry farms have also previously been cited by opponents. Antibiotic resistance linked to the use (and overuse) of the drugs in livestock farming has become a global concern in recent years, with increasing evidence that veterinary antibiotic usage can contribute to resistant infections in humans.

Despite acknowledging that the poultry sector previously used higher quantities of antibiotics, Griffiths said the industry has embarked on a dedicated - and successful - drive to reduce usage, particularly of drugs regarded as being important or critically important in human medicine.

Figures published earlier this month show a dramatic reduction in antibiotic use in UK poultry production - with an 82% overall decline since 2012, and a 91% reduction in the use of fluoroquinolones (classified as a critically important antibiotic for human health) in the same period. 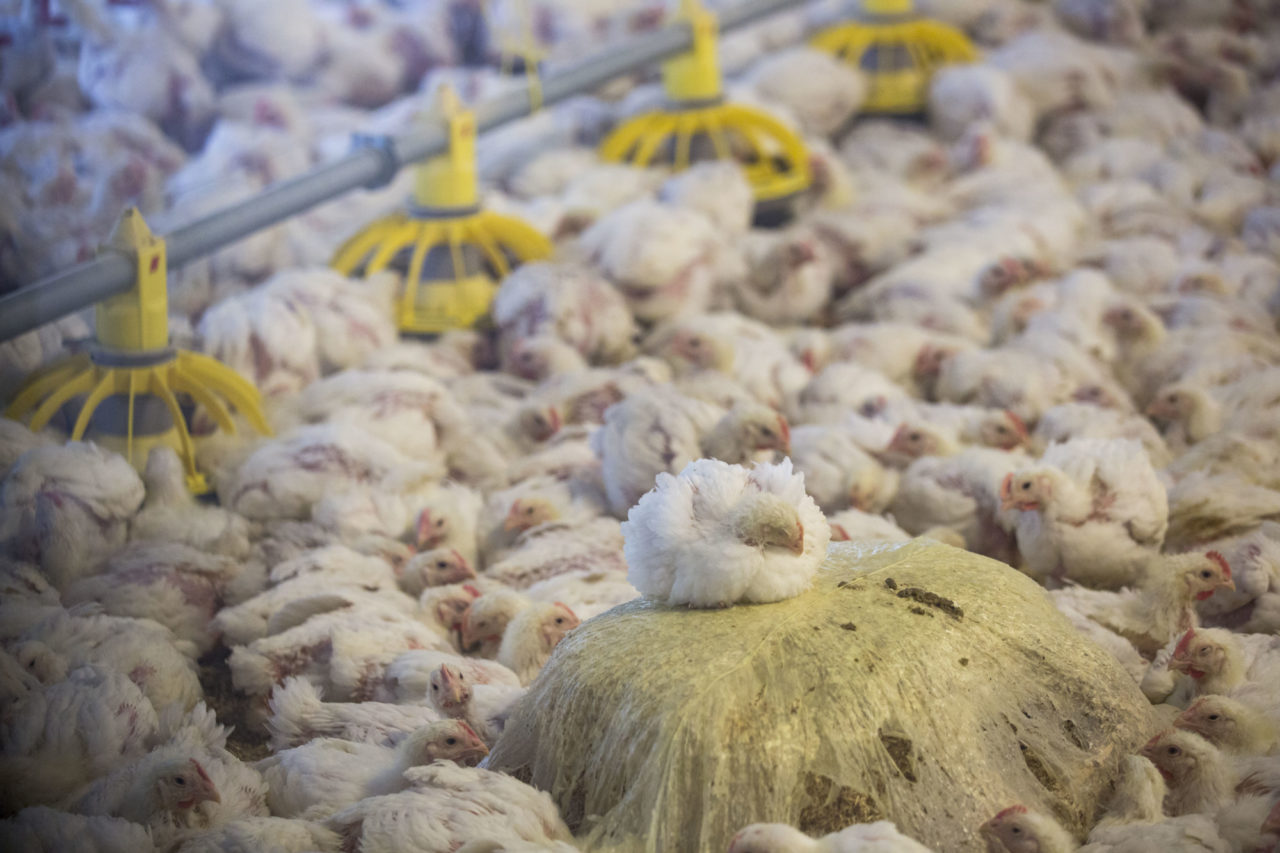 Chickens in a British megafarm, photographed by Rob Stothard

The reduction in antibiotic use has been welcomed by the government. The poultry industry was the first livestock sector in the UK to begin collecting its own antibiotic usage data in 2011, according to Griffiths (although the pig, dairy and beef sectors have now followed suit), and this enabled the process of reducing use to happen.

“The first four years were an exercise in understanding how much we use, why we use it, when we use it. And that included looking at all antibiotics important for use in humans, and then focusing on the critically important ones as well. So this was a sort of step over time”, he said.

“It started with questioning whether the practices we were using were the right ones. And that also coincided with...a greater interest in farm health and welfare. We were involved with some big work on some farm welfare with government at the time. And I think those [changes] coincided with the mindset of let’s try to reduce, let’s try to use less. In any given situation do we have to use antibiotics?”

“I don't think antibiotic-free poultry production is possible and anybody who says it is, is I think naive”

Despite this success story, Griffiths said the industry is not on a “race to zero” and antibiotic-free poultry production, which is championed by some US companies, is not currently on the table. “I don’t think that’s possible and anybody who says it is, is I think naïve.”

The industry also faces questions over whether overuse of antibiotics on farms in the past has created a legacy that impacts on public health today. Recent studies have found evidence of antibiotic resistant campylobacter, a leading cause of food poisoning, in poultry meat.

Tests carried out by the Food Standards Agency (FSA) found campylobacter resistance to ciprofloxacin - part of the fluoroquinolone class of antibiotics - has increased “significantly” in retail chicken in the past ten years, with previous use of the drugs on farms suspected of being partly to blame.

Griffiths said whilst the industry was “not going to play down” its role, it wasn’t possible to definitively say all resistant food poisoning bugs are a legacy of drug use on farms. “We’re seeing examples of resistance to antibiotics in campylobacter that have never been used in [the farm] environment... so that’s one of the challenges, we’ve got to understand how that happens.”

Campylobacter rates, as well as hygiene standards more generally in the poultry sector, have increasingly come under the spotlight in recent years, following a number of high profile scandals. In 2014 a Guardian investigation uncovered a series of alleged hygiene failings in several poultry plants and on farms, that experts warned could exacerbate the spread of campylobacter.

The investigation highlighted how almost two thirds of fresh retail chickens were at the time contaminated with the bug, which was - overall - causing around 280,000 illnesses and almost 100 deaths a year. Following a FSA and industry drive to tackle the crisis, rates of contaminated chicken have now fallen, although the issue remains a priority for food safety chiefs.

In 2017, separate food safety risks were highlighted by an undercover report by ITV news and The Guardian at a plant operated by 2 Sisters, the UK’s largest poultry processor.

Griffiths acknowledged the impact such cases can have - both publicly and in the industry - but said the fallout from the recent 2 Sisters case “boosted the focus on not just standards but how those standards are delivered and how they’re assessed and then how we as an industry are open about what goes on.”

“I think since that point and, up to now, and over the next year, eighteen months, you’ll see an increased move towards transparency, how we operate openly, talking about [whether these are the] standards we want?” 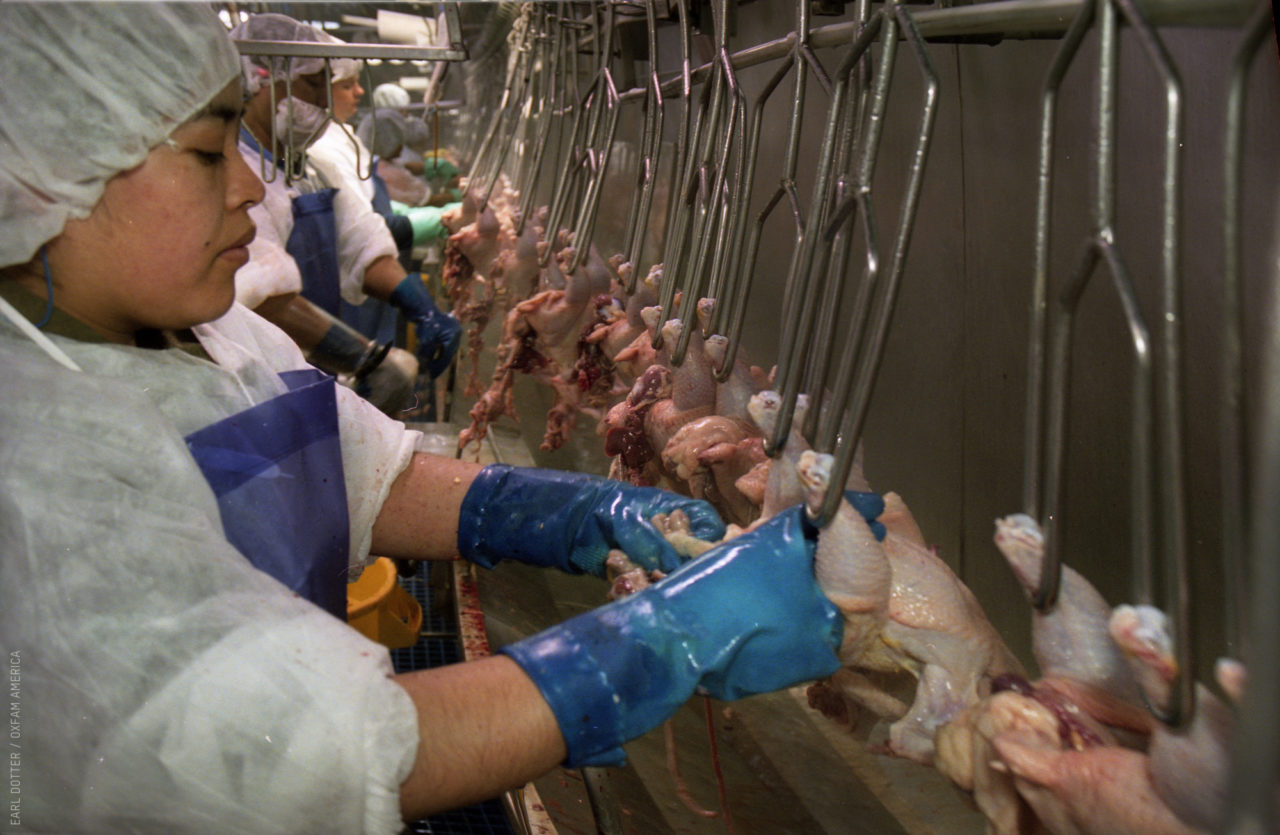 A stock image of a US poultry farm, photographed by Earl Dotter/Oxfam America
“Using chemicals to disinfect food at the end of a production process can hide a multitude of sins, but what it can’t hide is the need for their use in the first place”

The BPC is keen to highlight what it says is a bigger potential risk to UK consumers - cheap imported meat produced to lower standards as a result of post-Brexit trade deals. The group has been unusually outspoken in relation to fears that a trade agreement with the US could lead to British consumers dining on chicken that's been “chlorinated” - a practice that’s currently illegal in the UK.

Following recent suggestions by the US trade representative that the UK’s animal welfare and food safety standards were “unnecessary and restrict trade”, Griffiths hit back by saying such claims were “insulting”.

“British poultry producers don’t dip their chicken carcasses in chlorine, as we do not believe in ‘cleaning up at the end’ or taking any short-cuts when it comes to producing safe food”, he said. “Using chemicals to disinfect food at the end of a production process can hide a multitude of sins, but what it can’t hide is the need for their use in the first place.”

On a practical level, Griffiths said that if cheap imports were allowed to come in, the UK poultry sector could ultimately lose production capacity, with farms and slaughterhouses potentially forced to close. “My fear is that once we lose capacity it’s never coming back”, he said.

Although on this issue - unusually - the industry and campaigners are in agreement over the uncertainty Brexit will bring, there remain differences. Some campaigners fear US meat imports could lead to a “race to the bottom”, as UK producers seek to compete with cheaper products, with potential moves to lower standards and increasing pressure to ease UK regulations.

Griffiths believes this isn’t likely, and said the UK poultry industry is united: “I think we’re nailed our colours to the mast if you like on this. There’s a lot of political talk about improving standards, but maintaining and improving standards is the mentality that we have. We’re not going to drop standards.”

Header image of a British poultry farm, by Rob Stothard