Cameras will be installed in every abattoir in England as part of government plans to reduce cruelty.

The announcement was made as new figures obtained by the Bureau of Investigative Journalism show an increase in the number of incidents where animals are subjected to needless pain or distress as part of the slaughter process.

CCTV will be introduced in all areas where live animals are present, with government vets being given unrestricted access to the footage. Abattoirs found to be failing welfare standards could face a criminal investigation, staff licenses suspended or revoked or enforcement letters.

The announcement comes as the Bureau’s new figures show how more than 1,600 serious breaches of animal welfare standards were recorded in England and Wales between July 2016 and early February 2017 – that is seven a day - including livestock being ineffectively stunned, crushed, trapped and injured, and large batches of animals dying during transport.

In one case more than a quarter of a shipment of poultry died from heat stress before even reaching the slaughterhouse.

These were the most serious breaches - meaning animals were subjected to “avoidable pain, distress or suffering” in abattoirs or during transport to slaughterhouses.

Environment Secretary Michael Gove said the new plans for mandatory cameras, which are to be phased in this year, would ensure Britain is a "global leader" in animal welfare standards as we leave the EU. 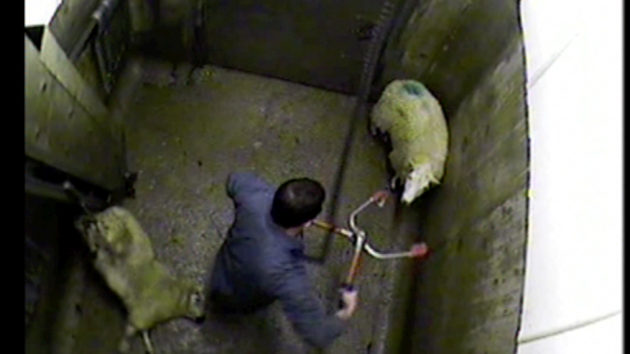 A sheep about to be stunned before being slaughtered. Animal Aid

Animal Aid, an animal rights group, said it was greatly encouraged by the plans, which would "protect vulnerable animals from gratuitous abuse and violence".

Campaign manager Ben Martin said the figures on serious welfare breaches in abattoirs come as "no surprise" as violence towards animals is "endemic" within the slaughter industry.

"We have revealed cases of dozens of animals being mis-stunned, whether deliberately or through incompetence, and many more incidents of overt cruelty, such as animals being kicked, punched, thrown and even having cigarettes stubbed out on their faces," he added.

These including failings in stunning - which can result in animals regaining consciousness before being killed. A further 1,523 examples were recorded during transport to abattoirs from farms in the same period. These include numerous examples of animals arriving at slaughterhouses with serious injuries, lame or - in many cases - already dead. Livestock were also found to be in the late stages of pregnancy, others arrived blind, bruised or full of maggots. There will be no legal requirement for CCTV to be installed on trucks or in farms.

The Bureau has been reporting on failings in abattoirs since August last year when we revealed more than 4,000 severe breaches of animal welfare regulations in English slaughterhouses between 2014 and 2016 - six a day on average. These included instances of chickens being boiled alive and truckloads of animals suffocating or freezing to death.

In April this year we reported on a similar situation in Scotland, where farm animals suffered more than 700 serious breaches of welfare rules between 1 May 2015 and 31 January 2017, according to official inspection reports.

The failures go beyond animal welfare. In February our report revealed one in four slaughterhouses in England, Wales and Northern Ireland were failing to take basic hygiene precautions to stop contaminated meat reaching the public. The failings could expose consumers to serious food poisoning illnesses such as E. coli, salmonella or campylobacter.

Plans to make CCTV mandatory in all slaughterhouses are also being considered by the Welsh government.

The announcement on cameras in abattoirs in England comes as part of a wide-ranging revamp of the legal animal welfare standards in the UK, the FSA said. The law will be updated to reflect enhancements in medicines, technology and the latest research and advice from vets.

The first to be updated will cover chickens bred for meat. A recent investigation by the Bureau revealed 95% of our poultry is now bred in huge industrial units - some housing more than a million chickens - where birds are mostly confined permanently indoors. Legal requirements allow chickens to be kept in sheds with up to 19 per square metre - giving each the equivalent space of one A4 sheet of paper.

The story revealed that there are now nearly 800 megafarms in the UK. This is part of a 26% rise in intensive farms across the country in six years.

Mr Gove was questioned on the report in parliament as some politicians feared Brexit could spark a move towards US-style agribusiness. In response, he said "we will not have US-style farming in the UK".

The Food Standards Agency told the Bureau it has a "zero tolerance approach" to any breaches of animal welfare standards. It backed "making CCTV mandatory".

Main image of sheep being processed in a UK slaughterhouse by Animal Aid.